American firm Pickard Chilton’s first project in Japan, modern design is incorporated into the site by reading its history

The construction of the Y2 project has started in December 2018. As a member of the landowner committee Mitsui Fudosan is involved this project, the start of the three major large redevelopment projects in front of Tokyo station. The site area is approximately 13,500sqm and TFA is approximately 290,000sqm. The completion is scheduled to be 2022.

Located within two development blocks, there will be a bus terminal to strengthen the transportation hub in the area, a “Bulgari Hotel Tokyo” as their first branch in Japan, retail space connecting the Yaesu shopping arcade, and an elementary school / daycare.

Pickard Chilton was appointed for the exterior design through a competition held in 2013. Pickard Chilton was established in 1997 and operated by three partners Jon Pickard and Anthony Markese from the office of Cesar Pelli, and William Chilton who formerly represented Ellerbe Becket (currently AECOM). Although Y2 is their first project in Japan, Pickard and Markese have Japanese project experience such as Hilton Fukuoka Sea Hawk (current name) and Biwako Hotel while they were in the Pelli office.

Katsuhiro Hata from the Building Business No.3 Group of Mitsui Fudosan explains that the landowner committee highly appraises PCI’s long-term view to create a unique attractiveness and value to the land within the new development, which was a factor leading to PCI being appointed. Hata also mentions “For our projects up until now we have not simply requested designers to include façade consulting, but to propose ways to discover architectural potential through the history of the site.”

Responding the Curb of Gran Roof

For Pickard Chilton, “The RFP provided a carefully detailed description of the site and was very much appreciated as it was extremely important information for our work.” (Chilton) Based on this information, PCI proposed the “Billowing Sail” concept. A design motif of boat or sail takes inspiration from the former moat of the Edo period which is currently known as Sotobori Dori which Y2 faces, and it also takes its inspiration from Tokyo Station being the starting point of travel.

Appearance of the overall volume and proportion are also included in the proposal. To implement the request of maximize the office floor plate, PCI’s design maintains approximately 4,000sqm as a standard rentable office area, and achieves a “slender exterior design appearance” by employing soft curbs and vertical niches.

The podium at the base of the tower has a curb responding the Gran Roof of Tokyo Station. The elementary school is located at the east side, where human scaled design to harmonize with the Yaesu neighborhood circulation and narrow allies was consider. Chilton explains “The important factors are the activities within the urban space. Y2 will be a key project in producing a creative community by collaborating with surrounding future projects.”

Photo Captions:  (1) The view to Tokyo Station from the construction office next to the construction site. Second person from the left is William Chilton who came to Japan for the groundbreaking ceremony, along with Sean Namgoong to his left who is in charge of design. Third from the left is Katsuhiro Hata of Mitsui Fudosan, Ryuji Nagamine who is the administrative manager at the construction site of Takenaka Corporation Tokyo headquarters, and James Lambiasi who is the Pickard Chilton Consultant in Japan. (2) Yoshihisa Yamamoto (3) Exterior image of west side, which faces Tokyo Station. Tower height is 240m (A1 Block). “Bulgari Hotel Tokyo” will occupy 39F to 45F. 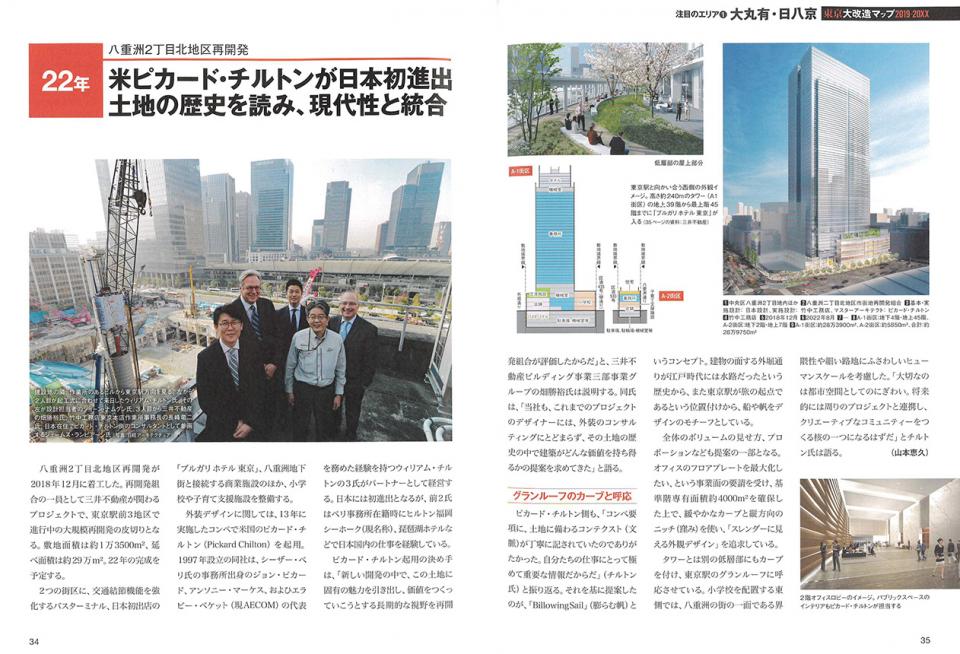