Jon Pickard is on a mission to enhance the urban experience.

A co-founding principal at international architecture firm Pickard Chilton, he has worked on some of the most iconic buildings around the world, including the World Financial Center in New York, the Exxon Mobil Office Complex in Houston, the Devon Energy Center in Oklahoma City and the Kuala Lumpur City Centre in Malaysia.

Pickard, who was close with his mother, has one major question when looking at designing a space: “Would my mom get it?” If not, it’s probably too much.

As in every industry, there are fads. In architecture, evidence of past fads are notoriously visible, as they can literally dominate the skyline of a city. Pickard believes right now there is a tendency to over-design, where architects are trying to incorporate too many elements in a single space.

“Instead of having two beautifully selected materials, to have 14. Instead of one pattern, to have eight,” he said at Bisnow’s Architecture and Design Summit in Houston on Jan. 29.

“A lot of architects design for their peers, to show off. That’s not our audience. We’re designing for the world, for the people who live and use and work in our buildings. And for the owners of the buildings, who have to make sense of it."

With a career spanning more than 40 years, Pickard has seen the architecture industry go through a wide variety of changes. The best change, in his opinion, has been the shift to collaborative relationships. While collaboration is not new, Pickard said the trend has gained significant traction in the last five years.

“It used to be, the architect saw themselves as the sole visionary, guide and arbiter of what to do. Today, we have a much more inclusive and collaborative process,” Pickard said.

Not only is collaboration more interesting, it is also more fun, and can open a project up to new possibilities much earlier. One example is bringing in structural engineers at the beginning of a project, allowing for valuable engineering input in the design process.

“I think the process is ultimately better, because those ideas are percolating, and somebody will say something that will spark an idea in you,” Pickard said.

Another trend that has gained major traction over time is the shift to sustainability.

“Sadly, the climate is in crisis, and we are not doing enough,” Pickard said.

While LEED certification has helped motivate developers to embrace higher standards, Pickard doesn’t believe it is even close to what is needed. The challenge is finding a way to incentivize the market to rapidly embrace more sustainable buildings, despite the higher costs.

Building large, sustainable, high-quality projects is expensive, and it could be several years before investors see a return. Pickard acknowledges that it is a challenge.

“We’re very fortunate because many would say we work at the very top of the food chain. So our investors are farsighted, for the most part,” Pickard said.

For major clients like Hines, financing becomes less of an issue. An extensive track record provides enough data to predict costs, sale values and returns. Pickard noted there has been increasing integration between financing sources and developers, allowing greater freedom to do high-quality projects.

Pickard claims he doesn’t have a single favorite project. What he tends to focus on, instead, are the relationships he has formed around specific projects.

In particular, Pickard said his firm has been fortunate to work on some major projects that have had a transformative impact on the community, far beyond what might have been possible in other locations.

The Devon Energy Center in downtown Oklahoma City is one such example. The corporate headquarters was designed to engage both Devon Energy employees and the wider public. Comprising a 50-story building, a rotunda for events, landscaped plazas and more, the complex has changed the skyline of the city.

That project was also indirectly responsible for attracting around $2B in additional developments in Oklahoma City, Pickard said.

Another project that resonates with Pickard is his experience in leading the design of the Kuala Lumpur City Centre in Malaysia, which includes the iconic Petronas Towers. The development, and the towers, created a whole new visual identity for the country, according to Pickard.

He is also particularly proud of his work on ExxonMobil’s campus in Houston. Unlike the other projects, which are extremely public-facing, the campus was designed with more privacy in mind, a change for an architect used to working on inner-city buildings.

Projects under construction by Pickard Chilton include Global Gateway Shinagawa, the redevelopment of the northern portion of Tokyo’s Shinagawa Station; the 2+U Class-A office tower in downtown Seattle; and the mixed-use Miami Worldcenter building, the biggest building project in Florida’s history.

Last year, Pickard Chilton made headlines when it partnered with global design and consulting firm Urup to participate in a design competition. The goal? To design an Uber Air Skyport, proposing a fully considered and technically feasible facility in Melbourne, Australia. Uber Air has targeted a 2023 commercial launch.

Pickard said one of the main reasons the firm has been so busy in recent years is that more companies have realized how effective real estate can be to attract and retain talent, boost productivity and engage the local community.

“The thing that is interesting for me is — we’re in a time of great change. People have realized that real estate does need to be a strategic piece of their arsenal,” Pickard said.

“If you don’t embrace real estate as a strategic alternative in your quiver, you’re going to be doomed to the bottom of the heap, because your competitors are going to wipe you out.” 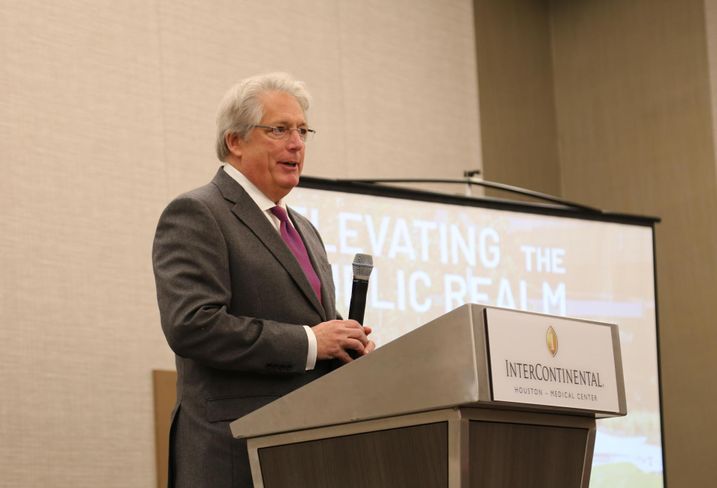