New Tokyo Railway Station to Kick Off $5B Development

TOKYO—Takanawa Gateway, a new railway station opening in March as part of a nearly $5 billion development, has sparked a backlash here.

It’s not because developers are taking anyone’s land or blocking anyone’s views. It’s because the English word “gateway” doesn’t trip off the tongue for locals. Some 48,000 people signed a petition asking the railway to remove it.

But the name isn’t changing, says Kenichiro Arai, the executive leading the development for the railway usually known as JR East. He expects locals will get used to it.

His response shows how Japanese developers are targeting overseas business in hopes of lifting Tokyo’s status as an Asian center. “We are creating a community to lure companies and talent from all over the world,” Mr. Arai said.

This year’s Summer Olympics will also bring millions of visitors to Tokyo, and East Japan Railway hopes to use the Takanawa Gateway station as a showcase of cutting-edge technologies including an unmanned convenience store and robot guides.

Seven buildings will be lined up on the long and narrow site like islands of the Japanese archipelago, says designer William Chilton. Construction is set to begin soon after the Tokyo Olympics in July and August, with partial opening scheduled for 2024.

Global Gateway is in the southern part of the capital, a few miles from the areas around the Imperial Palace that have traditionally drawn the bluest of blue-chip corporate tenants.

What the Global Gateway location lacks in prestige, it may make up for in proximity to transport. A new magnetic-levitation train is set to start service at Shinagawa station, next to Takanawa Gateway, as soon as 2027, offering travel to Nagoya in 40 minutes.

The southern area is close to Haneda airport, which used to be mainly for domestic flights but is increasingly taking over from more-remote Narita airport as the top international gateway to Japan.

“There is going to be a real focus on international business,” said Mr. Chilton. “You are going to have a very strong relationship with Haneda airport.”

Because of the airport’s proximity, buildings have to stay under about 600 feet, according to Hiroo Ichikawa, an urban policy expert and emeritus professor at Meiji University. That’s less than half as tall as the tallest building at a competing development by Mitsubishi Estate Co. just north of Tokyo Station set to be completed in 2027.

Still, at 32 acres, Global Gateway Shinagawa is plenty big—larger than the Hudson Yards project in Manhattan, which JR East studied as a model.

“There isn’t any more open land in central Tokyo that has similar scale to the space in Shinagawa,” says Prof. Ichikawa—except for the former fish market in Tsukiji, a nearly 50-acre site near the Ginza shopping district that developers are coveting.

The Global Gateway designers hope to attract people from overseas not just for a short convention and hotel stay but also to live. Upscale residences and an international school are part of the plan, all connected by promenades.

A new magnetic-levitation train is set to start service at Shinagawa station, next to Takanawa Gateway, as soon as 2027. Photo: Natsuki Sakai/AFLO via ZUMA Press

It is a similar concept to one of the other big projects under way in Tokyo, a $5.3 billion Mori Building Co. development near Roppongi that also is set to include an international school and 1,400 residences, with completion scheduled for 2023.

These developers hope to keep Japan on the map as a business center in the region.

As China rose to become the world’s second-largest economy, Japan’s relatively high taxes, slow growth and poor English skills tended to put it behind Hong Kong and Singapore as a regional hub.

One ranking of global competitiveness compiled by the IMD World Competitiveness Center of Switzerland put Japan at No. 30 in 2019, lagging not only Singapore and Hong Kong but also China, Taiwan, Malaysia, Thailand and South Korea. On the Tokyo Stock Exchange, 127 foreign companies were listed at the peak in 1991. Now, there are only three. 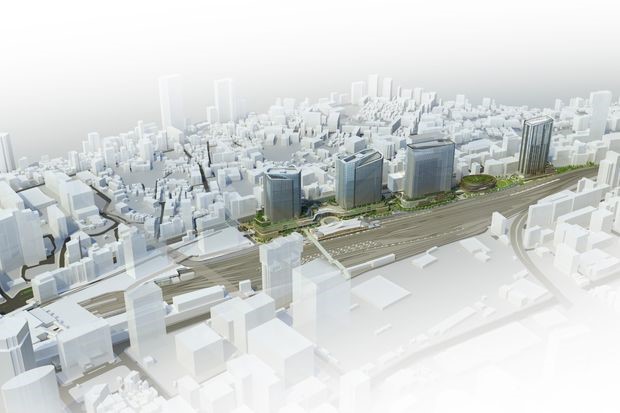