Over the years, Denver’s skyline has seen its fair share of changes.  But Thursday night, something new appeared: a bright pink heart, visible from miles away. Stephanie Rosenthal is a senior property manager for Hines, which owns and operates 1144 Fifteenth Street, otherwise known as the Optiv building.  “Typically it’s hustling and bustling, with about 2,000 people in the building every day,” she says. “It really feels like a ghost town now.”

Rosenthal says Managing Director Chris Crawford saw a photo of a similar design on a building in Europe, and asked her if it would be possible.  “Without even knowing what it would take to make it happen, I said, ‘Sure, we can definitely do that!'” said Rosenthal. “So we put our very smart building engineers to work.” Engineers took blueprints of the building, which opened in 2018, and identified a design for the heart. Next, they purchased hundreds of feet of pink gels from a theater supply company, along with dozens of LED lights. “We put a whiteboard up in each window, and then we put LED light fixtures wrapped in pink in-between the whiteboard and the window itself,” Rosenthal said. They flipped the switch on the design last Thursday.

In total, Rosenthal says the heart spans eight floors and includes 36 units.  “Initially when I saw it from the highway, I was like, ‘Oh my goodness, I did not expect it to be that bright and that impactful,” said Rosenthal. She says the heart is intended primarily as a way to thank doctors, nurses and others on the front lines. “They’re risking their lives every day,” Rosenthal said. “They don’t have a chance to stay home with their families and stay safe. They’re putting it on the line for all of us, so we appreciate them immensely.”  Rosenthal says it’s also a reminder that we’ll get through this together. “It’s a beacon of light and positivity, and a huge thank you,” she said.  Rosenthal says the lights will remain on until the stay-at-home order is lifted. They are most visible at night, but can also be seen on cloudy days.  “Once we’re able to get back to normal, the lights will go out,” she said. 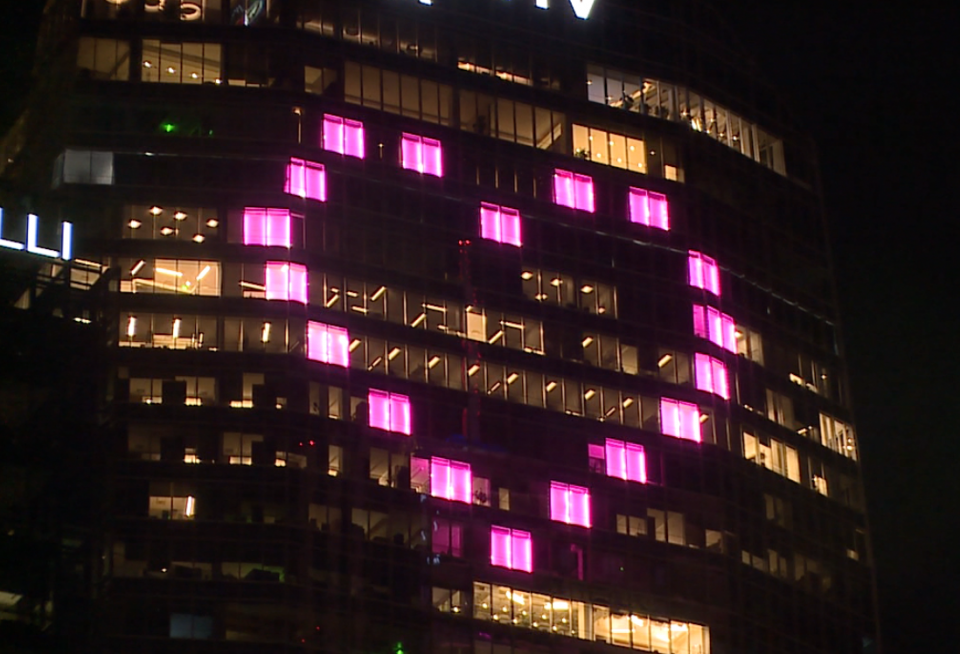