Google’s soon-to-be-constructed headquarters in Cambridge, Mass., started out as a pile of foam blocks in Anthony Markese’s 980 Chapel St. office.

Markese, one of the principals of the New Haven-based architecture firm Pickard Chilton, used the blocks to play around with different configurations of Google’s new home. He made dozens of foam stacks, tweaking each iteration’s angles and sizes ever so slightly. He drew sketches and created renderings to visualize the design.

Soon, he moved on to more complex physical models and eventually built a detailed final prototype, complete with miniature trees and the outlines of neighboring buildings.

Markese announced his role as a designer of the new Google campus in early June. The building, located at Cambridge’s Kendall Square, will be 16n stories and will contain 417,000 square feet of office space. The project involves demolishing a building at 325 Main St., constructing a new tower in its place, and connecting the new structure to a next-door building Google currently occupies at 355 Main St.

A major objective for the architects was “to design a building that fit in with the square,” Markese said. He added that public space factored heavily into the design.

The new building takes the shape of a parallelogram, with a few shifts towards the building’s base, angled specifically so as to create visibility between a public plaza behind the building and a roof garden beside it. The building will also feature a public terrace that will connect the two green spaces, allowing pedestrians an easy means of travelling between the plaza and the garden.

The building will also feature a few indents in its façade —“apertures,” Markese called them— that can function as terraces.

Inside, “it’s all open office space,” he said.

Mig Halpine, the firm’s director of communications, and Markese said that the building will contain the kinds of amenities for employees for which Google is known, but said they were unable to elaborate further. At other office buildings, Google provides its employees with fitness centers, cafeterias, libraries, lounges, and even Lego stations.

“It would not be different from what you’ve seen,” Halpine said of the 325 Main St. building. “They have to have the best amenities and facilities to attract employees,” he added. “It’s highly competitive in the tech world.”

The building previously at 325 Main St. is now undergoing demolition.

Out of its New Haven offices, Pickard Chilton has worked on projects all over the country, from ExxonMobil’s campus in Houston to the Minnesota Senate Building. It has produced designs for Uber’s Sky Towers in Melbourne, Australia and Sky Loft in Los Angeles, anticipating the company’s forthcoming rollout of electric helicopters.

“What makes us distinctive is that we practice exclusively as design architects,” Halpine said.

As design architects, Halpine explained, the firm plans the “core and the shell of the buildings.” Its members team up with architects of record, also known as executive architects, who have knowledge of the nuts and bolts of the local conditions. Halpine said that Pickard Chilton’s status as a design architecture firm “allows us to work virtually anywhere, at any size.”

Pickard Chilton employs around 50 people in total, many of whom have offices in an open, sunlit room cluttered with models of projects the firm has worked on. In the building next door, the firm owns a studio space in which the physical models are constructed, as well as a virtual reality lab and a photo room.

While the firm has only recently taken on its first New Haven project, Markese said the city impacts his work every day.

“Sometimes I forget, when I’m walking around, how interesting the buildings here are. People travel from all over the world to see these buildings,” he said.

Yale’s architectural presence in the city has particularly influenced his work at the firm, Markese added.

“We were starting to figure out the size of a campus we were doing, and we kept going back to [Yale’s] Old Campus,” he recalled. The team ended up sizing the center of the campus comparably to Yale’s.

Markese has been a principal at Pickard Chilton for two decades.

“I’m one of those people that decided I wanted to be an architect from a very young age,” Markese said.

He grew up in Chicago, during a construction boom. “I didn’t realize it at the time, but looking back, architecture is a big part of the culture there.”

He attended college at the University of Illinois and earned a master of architecture degree from the Yale School of Architecture. Before joining Pickard Chilton, he worked as a senior associate at Cesar Pelli & Associates, another New Haven-based firm.

Markese had recently designed another tech building in Kendall Square for Pickard-Chilton when he first received the call from Boston Properties, the developer working with Google. Boston Properties had liked the design of the neighboring building — the headquarters for Akamai Technologies — and decided to offer Markese the job.

“To us, it’s a really, really important project,” said Markese. “It’s kind of an honor.”

The large-scale building is exactly the kind of project Markese says he loves working on. “I find it really fulfilling to have an impact on a larger group of people,” he said, explaining that the building will influence not only Google but the whole Kendall Square area. 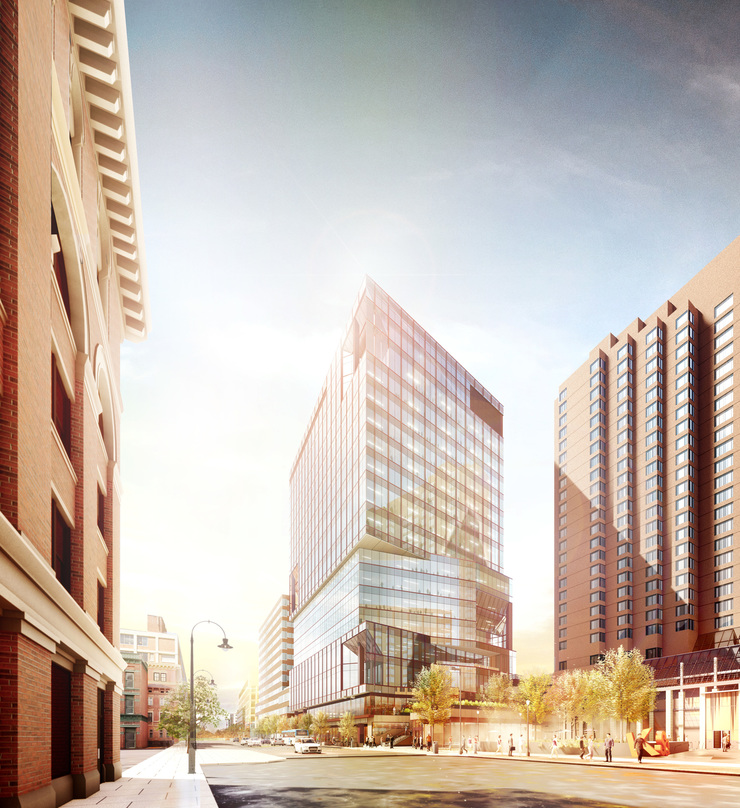